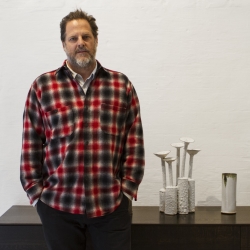 TYLER HAYS is founder and designer of BDDW, an American furniture company dedicated to the creation of well-crafted timeless designs. Since founding the company almost 20 years ago, he now has his own showrooms in New York and Milan, and produces everything in a 150,000 square feet manufacturing, engineering and design studio in Philadelphia. At the University of Oregon, Tyler started in physics and computers but graduated with a BFA in painting and sculpture. Eventually he became a furniture designer and builder, founding BDDW in the late 90's. Along the way, he dabbled in music, fashion, metal-smithing, ceramics, carpentry and architecture – along with dozens of side interests like bee-keeping and micro-brewing. Tyler still paints in a separate studio in Philadelphia. In 2012, Tyler purchased M. Crow & Co, a 107-year old general store in his hometown in the remote Wallowa valley in northeastern Oregon to prevent its closure. This month, he will launch M. Crow in NYC next to BDDW to offer an eclectic range of items from men’s and women’s clothing, watches, and jewelry, to knives made from BDDW's recycled bandsaw blades, small batch brewed beer in ceramic kegs, speakers, and household items - basically all the stuff Tyler makes for himself. Tyler is fascinated with materials, shapes, colors, the mechanics - and everything in between. BDDW and M.Crow are a collision of all his hobbies and interests, and are outlets to fulfill his lifelong dream of making everything that he needs or uses in his life. Tyler has been recognized as a creative visionary and hands on entrepreneur who has forged his own path in building a well respected brand. Wallpaper magazine has listed him on their Power List in 2014 and 2015, consecutively. In addition, he founded Art + Design Responds, a loosely formed group of artists, designers, and creatives to raise disaster relief funds that go direct to the front lines. Earlier this year, $200,000 was transferred to three grassroots organizations in Nepal to help with rebuilding efforts. Tyler lives and works in Philadelphia with his partner, painter Jen Wink, and their three children and two dogs.